Seeing of good omens by Sita in Asoka Vana

Seeing of good omens by Sita in Asoka  Vana 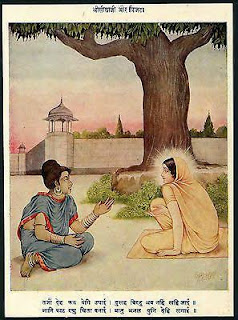 (This is a scene from Sundara kanda  of Valmiki(29th chapter) . Sita  feeling her hopless  condition   decides  to  commit  suicide and at that  time several good  Omens are seen.Seeing them she becomes happy.

SEngalipuram   recommends   this to be read  by people  facing   hopeless  condition due to bad dreams, constant fear  , poverty etc. He  is of the opinion that the fear  will go away  and good period will start)

Not only that apart from these two, her left thigh which was round and fat like the elephants trunk throbbed giving initial signals to her of the coming back of Sri Rama.                 29.4

Thus ends the twenty ninth chapter of Sundara Kanda which

is in the Ramayana which is the first epic written  by Valmiki.