( Reading of Valmiki Ramayana  is supposed to grant you all prosperity and in the end salvation. It is proper to read it  after   chanting an initial prayer  , do the Parayana and after it   complete it by another  series of prayers. Here is the system  for Parayana  by Vishishtadvaithins. They are followers of saint Ramanuja and the Azhvars  and are Vaishnavites by nature .It is believed that  Valmiki Ramayana   was taught to saint Ramanuja  by Periya Thirumalai Nambi  (also known as  Sri Saila pootna)  . Because of this the initial prayer   starts   with a prayer to this great saint.Here also there is an initial prayer ,reading of Ramayana   and then again prayer.)

1.Start the  Parayana  with a prayer  to Sri Saila poorna (Periya Thirumalai Nambi):-

1.I  salute  Thirumalai nambi  , who is the grand father  of Lord Brahma*
Who gave great commentary to Valmiki Ramayana    ,
Who is a great   teacher and   very great  commentator
*.Lord of Thirupathi called him his father   and so he is grand father  to Lord Brahma.
(Thirumalai Nambi   also called as Saila Purnar was the maternal uncle of Saint Ramanuja    and was the  one who taught   Ramayana   to Ramanuja.)

Salutations to The nightingale Valmiki,
Who sits on the poem like branch,
And who goes on singing sweetly,
“Rama”, “Rama” and “Rama”.

Who in this world will not attain salvation,
Who happen to hear the story of Rama,
Composed by the lion among poets Valmiki,
Who always lived in the forest.

I salute that resplendent sage ,
Who never got satisfied,
But forever drank the story of Rama,
Which is like the sea of nectar.

I salute   the terror to Lanka  , who is valorous son of Anjana  ,
Who destroyed the sorrow of Sita, who is the God of monkeys who killed Akshaya  Kumara.

I bow my head and salute the emissary of Rama,
Who has won over his mind,
Who has similar speed as wind,
Who has mastery over his organs,
Who is the greatest among the knowledgeable,
Who is the son of God of wind,
And who is the chief in the army of monkeys

I salute that son of Anjana with folded hands,
Who crosses the great ocean playfully,
Who took away the fire like sorrow of Sita,
And with that burnt the city of Lanka.

I bow before the darling son of the god of wind,
Who is the son of Anjana,
Who is great among killers of Rakshasas,
Who is like a golden mountain,
Who is handsome to look at,
And who lives near the roots of Parijatha tree.

I pray and salute the son of wind god,
Who brought to end the rakshasas,
Who is always present with eye full of tears,
With head bowed in veneration,
Wherever the praise of Lord Rama is sung

When the God who is known by Vedas,
Was born as the son of Dasaratha,
Veda was born again from Sage Valmiki as Ramayana.

The words  , their alliteration  ,their conjunction  ,
With equally   sweet and appropriate  meanings ,
And very  inimitable    story of killing of Ravana ,
Occur in the   history of Rama   composed by the sage.

12.I salute  Rama who exterminated  asuras who move at night  ,
Who is Raghava , who is son of Dasaratha  , who is unlimited,
Who is the Lord  of Sita, who is   gem lamp  of the  clan of Raghus,
Who has hands touching his  thigh   and has eyes like lotus  petals.

I salute that black coloured Rama,
Who sits along with daughter of Videha,
And in the company of Baratha and others,
Inside the golden shed beneath the holy tree of Karpaga,
On the seat of flowers bedecked with jewels,
Built in its centre,
Explaining the essence of knowledge,

Let the monsoon be timely and plentiful,
Let earth be covered with vegetation,
Let the country live without problems,
And let good people never have fear.

4.The Cauvery   river increases   with time  if  Lord Indra sends  rain in time  ,
Let there  be victory to Ranganadha   and let the  wealth of Sri Ranga  increase

Let good things occur to the king of the country,
Who looks after his people well, in the path of justice,
Let Cows* and Brahmins** have a pleasant life daily,
Let all people of the world have a very pleasant life.
*wealth was measured by cows in those times
** People in search of God

Let good happen to Rama,
Who is venerated by Vedas and Vedanta,
Who is of the black colour of the rich cloud,
Who is one of the prettiest among men,
And who has a fame which is pure.

Let good happen to Rama,
Who is a confidant of Viswamithra,
Who is the matured luck of ,
The king of Mithila and ,
Is the form of pure humility.

Let good happen to Ramabhadra,
Who is a devotee of his father,
Who shines with Sita and his brothers,
And who makes the entire world happy.

Let good happen to Lord Rama,
Who is courageous and kind,
Who left the city of Ayodhya,
And lived in the forest of Chithrakoota,
And who served all great sages.

Let good happen to my Lord Rama,
Who was with Lakshmana and Sita,
Who was armed with sword and bow,
And who is always served by devotees.

Let good happen to the giver of salvation,
Who lived in the forest of Danda karanya,
Who was the enemy of Asuras,  Khara and Dhooshana,
And who was greatly devoted  to Jatayu , the king of birds.

Let good happen to him who has lot of good qualities,
Who liked the fruits and roots offered by Shabhari.
And can be fully realized , extremely easily.

Let good happen to the God who is very brave,
Who can be easily be attained by Hanuman,
Who used to fulfill desires  of King Sugreeva,
And who wounded and killed the great Bali.

Let good happen to the God who is brave in battle,
Who is the valorous hero of the clan of Raghu,
Who built the bridge over the sea,
And who won over the king of Rakshasas.

Let good happen to Lord Raghava,
Who presented with happiness Lanka,
To Vibheeshana due to his love,
And who has the entire world as devotees.

Let good happen to Lord Raghava,
Who was crowned along with Sia,
When he returned back to the city of Ayodhya,
And who is the king of all kings.

Let good happen to the Lord of the Raghu clan,
Who is served by Lord Brahma and other devas,
Who protected Vedas and Brahmins,
And who was the king of the soul of Janaki.

Let good happen to the Lord of the Raghu clan,
Who was got to us by the grace of the saint Jamathru,
Who is my Lord who is on of the greatest.

Let good happen to the Lord who only did good,
The salutary song about him is greatest by my teacher,
Grater than all that is written by previous great teachers. 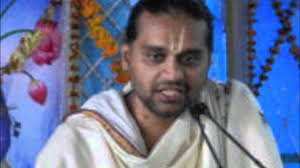