( The reading of Valmiki Ramyana   should start with  prayers at the  commencement and prayer    after  the Parayana  is over. Smarthas   are  Brahmins who   are the  followers of Advaitha  propounded by Adhi Sankara   and   worship five deities  viz Shiva, Vishnu  , SAkkthi  , Subramanya   and Surya. ) 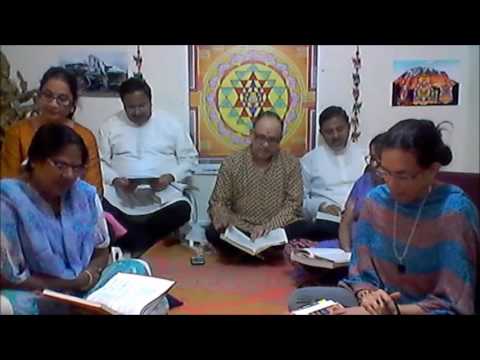 1.Slokas   to be At commencement of Parayana

Dressed in white you are,
Oh, all pervading one,
And glowing with the colour of moon.
With four arms, you are, the all knowing one
I meditate on your ever-smiling face,
And pray, “ Remove all obstacles on my way”.

Oh Lord who is the God of speech , who has a  clear mind ,
After praying   whom at the   very beginning ,
With gratefulness , I  would salute him who has  an elephant face  .

3.And hen  we have to  continue  our prayers to  Saraswathi, Valmiki, Hanuman , Ramayana  and then Rama

Let that goddess of words, Who has four hands,
Who holds the garland of crystal beads in one hand,
Who holds parrot, white lotus and book in other hands,
And who is as lustrous as kunda flowers, moon, conch and crystal beads,
Live always in my face and bless me.

Salutations to The nightingale Valmiki,
Who sits on the poem like branch,
And who goes on singing sweetly,
“Rama”, “Rama” and “Rama”.

Who in this world will not attain salvation,
Who happen to hear the story of Rama,
Composed by the lion among poets Valmiki,
Who always lived in the forest.

I salute that resplendent sage ,
Who never got satisfied,
But forever drank the story of Rama,
Which is like the sea of nectar.

I salute   the terror to Lanka  , who is valorous son of Anjana  ,
Who destroyed the sorrow of Sita, who is the God of monkeys who killed Akshaya  Kumara.

I salute that son of Anjana with folded hands,
Who crosses the great ocean playfully,
Who took away the fire like sorrow of Sita,
And with that burnt the city of Lanka.

I bow before the darling son of the god of wind,
Who is the son of Anjana,
Who is great among killers of Rakshasas,
Who is like a golden mountain,
Who is handsome to look at,
And who lives near the roots of Parijatha tree.

I pray and salute the son of wind god,
Who brought to end the rakshasas,
Who is always present with eye full of tears,
With head bowed in veneration,
Wherever the praise of Lord Rama is sung

I bow my head and salute the emissary of Rama,
Who has won over his mind,
Who has similar speed as wind,
Who has mastery over his organs,
Who is the greatest among the knowledgeable,
Who is the son of God of wind,
And who is the chief in the army of monkeys

Keeping   with folded hands in salute   they drink with respect  ,
The honey  of Ramayana   which   came out of the  lotus  like face of Valmiki,
By doing which   the illness  of birth , the danger of old age and very  trouble causing death ,
And troubles due to samsara    would vanish  and we would reach permenantly  reach the world  of Vishnu.

Let the whole world become holy,
By this river called “The story of Rama”,
Which starts from the mountain of Valmiki,
And joins the ocean of Rama.

2. The words  , their alliteration  ,their conjunction  ,
With equally   sweet and appropriate  meanings ,
And very  inimitable    story of killing of Ravana ,
Occur in the   history of Rama   composed by the sage  ,
3.Valmiki giri sambhootha Rama Sagara gamini,
Puinathu bhuvanam punyaa Ramayana maha nadhi.

Let the whole world become holy,
By this river called “The story of Rama”,
Which starts from the mountain of Valmiki,
And joins the ocean of Rama.

The sea filled with the    water of slokas   and chapters like the collection of waves,
The books   are like   the great fishes  and I salute  the sea of Ramayana

When the God who is known by Vedas,
Was born as the son of Dasaratha,
Veda was born again from Sage Valmiki as Ramayana.

I salute that black coloured Rama,
Who sits along with daughter of Videha,
And in the company of Baratha and others,
Inside the golden shed beneath the holy tree of Karpaga,
On the seat of flowers bedecked with jewels,
Built in its centre,
Explaining the essence of knowledge,
To the assembled sages,
And to the son of Anjana.

I salute the  bluish black colour Rama  who sits in the middle with softness  of lotus flower,
with   Sita  on his left side  ,Hanuman on his front  , Lakshmana   behind him  , Shatugna and Bharatha,
On his sides and surrounded on all four sides   by Vayu and other dik Palakas,
And  Sugreeva  , Vibheeshana  , the prince Angadha   and Jambhavan  ,

.Salutations to Rama  with perfect qualities whose   consort  is the daughter  of Janaka.
Salutations to him who is respected  by Lord Shiva and Indra and who is saluted by  moon,  sun and the wind.

Let good things occur to the king of the country,
Who looks after his people well, in the path of justice,
Let Cows* and Brahmins** have a pleasant life daily,
Let all people of the world have a very pleasant life.
*wealth was measured by cows in those times
** People in search of God

Let the monsoon be timely and plentiful,
Let earth be covered with vegetation,
Let the country live without problems,
And let good people never have fear.

Let sonless people have son,
Let people with son have grand sons,
And let people who are poor or rich,
Live and see one hundred autumns.

4.Charitham Raghu Nadhasya   satha koti pravishtharam,
Ekaikamaksharam   proktham  Maha pathaka  nasanam
4.The story of Raghu clan is spread over  hundred crores.
And canting of one of its letters  would destroy the bad effects of   greatly evil acts.

By hearing   Ramayana   with devotion or its one verse or one line  ,
Would take you to the place of Brahma and Brahma would worship you always.

That  auspiciousness which was  saluted by  Lord Indra   and all devas,
And which lead to destruction of Vruthra ,Let that   bring  us auspiciousness.

9.That  which was removed by Indra   when Asuras were churning  for nectar ,
To bring auspiciousness   to Adhithi  , Let that   bring us auspiciousness.

10 When Lord Vishnu with great power  as Trivikrama   wend around  ,
Then auspiciousness  happened   and let that bring  auspiciousness.

Let that great one  who brings auspiciousness  to seasons  , ocean,
Islands, Veda, the worlds by showing the way, bring  auspiciousness to you always.